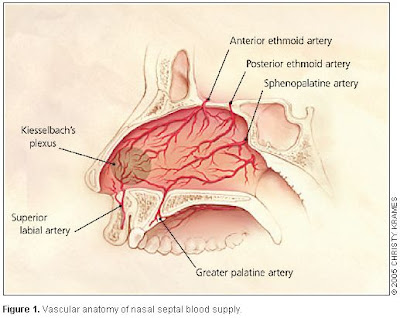 Anterior versus Posterior Bleeding
More than 90% of episodes of epistaxis occur along the anterior nasal septum at a site called Kiesselbach's area. This area receives blood from the terminal branches of the sphenopalatine, ethmoidal, and superior labial arteries. Anterior epistaxis is most often self-limited and does not require medical attention. Pinching the anterior aspect of the nose (not the nasal bones) provides tamponade for the anterior septal vessels and use of topical vasoconstrictors and anesthetics (combination of lidocaine or ponticaine with phenylephrine or oxymetazoline spray) and topical moisturizing ointments can be of value. The patient should relax, tip the head forward or backward, and avoid swallowing or aspirating any blood that may be draining down the posterior pharynx. Packing the nose with absorbable hemostatic materials or chemical (silver nitrate) or electrical cautery is sometimes necessary. Approximately 10% of nosebleeds occur posteriorly, along the nasal septum or lateral nasal wall.

How common are coagulopathies in patients hospitalized for epistaxis?
A: Forty-five percent of patients hospitalized for epistaxis have systemic disorders with the potential to contribute to nosebleeds, including genetic disorders such as hemophilia and acquired coagulopathies due to liver or renal disease, use of anticoagulant medication, or hematologic cancers.